We’re excited to get our latest release out the door and in your hands today. It includes new capabilities to help you drive change with confidence and automate the delivery and operation of even more of your infrastructure.

Puppet Enterprise 2016.1 includes new ways to orchestrate change, giving you direct control and real-time visibility as you deploy changes to your infrastructure and applications. We’ve also added integrations with Splunk and Atlassian HipChat to help unify your DevOps toolchain. And, last but certainly not least, we’ve introduced Blueshift, a new project to empower our customers to build and operate constantly modern software. Blueshift will initially focus on building tools to help you adopt software that will be prevalent in enterprise production environments in the coming years — for example, containers and next-gen OSs.

I'm happy to share a few of my favorite things in this release.

Orchestrate change to infrastructure and applications

Last fall, we released new capabilities to help you model and deploy distributed applications. This release builds on those capabilities, making it possible for you to push out any change on demand so you can orchestrate ordered deployment of both infrastructure and applications. With Puppet Enterprise 2016.1, you now get:

The Puppet orchestrator makes it easy to control the rollout of configuration changes when and how you want them. Want to roll out an NTP change across your fleet of thousands of servers? In previous versions, you would push out a change and then wait for it to enforce in the next 30-minute run interval, relying on eventual convergence across your server fleet.

With Puppet Enterprise 2016.1, you can now push out your NTP change immediately to a specific number of servers, in a phased deployment, and have real-time visibility into how things are going. If the deployment is going well, you can continue rolling out the change across your entire server fleet. If it isn’t, you can pause the deployment, view resource events and monitor reports in real-time, and throttle the deployment or adjust on the fly.

Last year, we introduced a new way to visualize your infrastructure model as a graph, giving you unprecedented insight into how your infrastructure is configured and the relationships across those resources. Now we’re building on these interactive visualizations with a brand-new dependency graph. This new view makes it easy for you and anyone on your team to see the upstream and downstream dependencies across the configurations you define and enforce with Puppet. This makes it easier than ever to troubleshoot issues, optimize your infrastructure as code, and understand the impact of changes so you can deploy more confidently, and collaborate by sharing your configurations with other teams.

As more of our customers look to expand their use of Puppet across teams, they’ve asked for ways to easily understand how their infrastructure is configured without needing to review code. We added this new set of interactive visualizations, based on your feedback, to make collaboration easier and to give you more confidence in the changes you’re making across your systems before you make them. 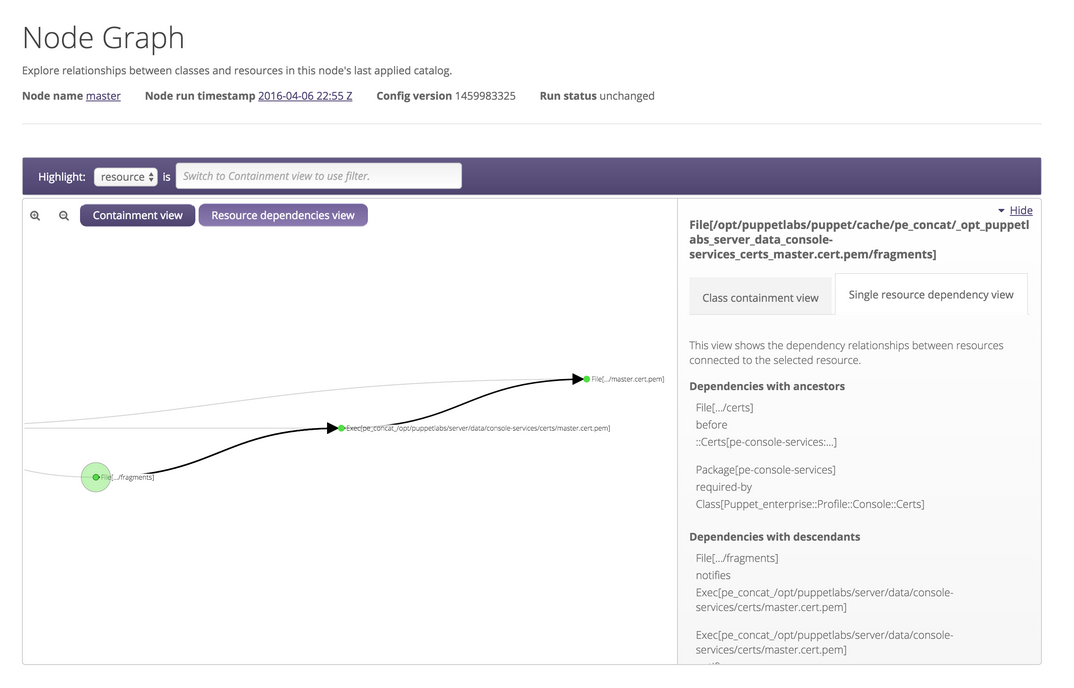 We’ve heard from our customers how important it is to have intelligent workflows for reviewing, testing and promoting infrastructure code across development, testing and production. Our code management capability makes that process automatic and repeatable. With this release, we’ve added an intuitive command line interface for Code Management and for syncing code across multiple Puppet masters, to help you:

In our last release, we introduced token authentication, providing more granular ways for users to log in using their own credentials by gaining a token that permits them to use Puppet Enterprise remotely. This gives you an even more detailed paper trail of exactly who changed what and when, to help with auditing and security.

This release builds on our existing capability to revoke access to Puppet Enterprise services on a per-user level. With token revocation, you can now remove access on a per-token basis, to make it easier to instantly prevent someone from gaining remote access that they should no longer have. In addition, if a single token is ever compromised, you can simply revoke it and don't have to lock out the entire user account.

Many of you have told us that you use monitoring tools like Splunk within your DevOps toolchain to continuously monitor your environments. Our new Puppet Enterprise App for Splunk comes with four dashboards that let you analyze the health of your Puppet infrastructure within Splunk. You’ll now be able to: 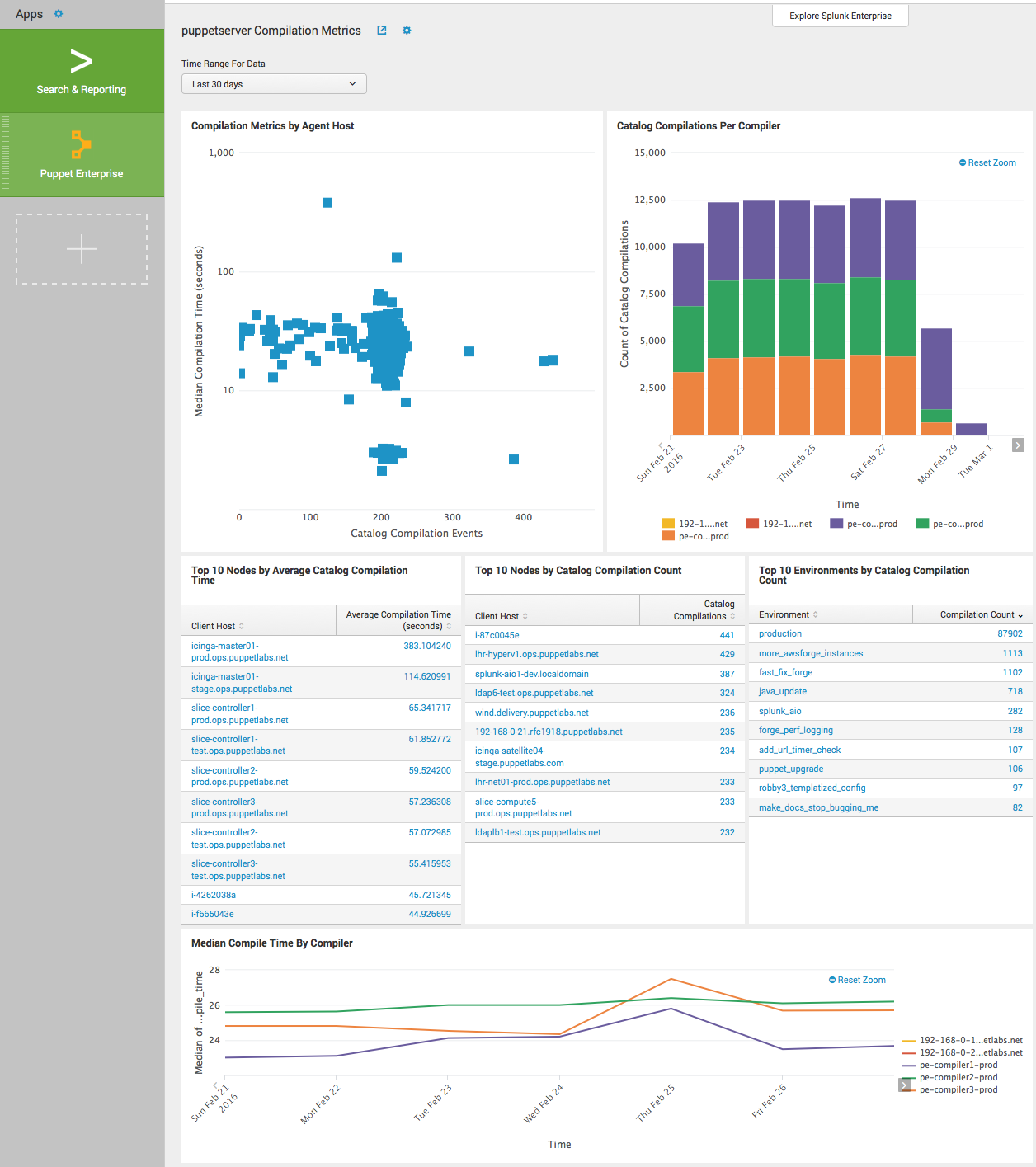 We also updated our Splunk module, which allows you to automate the installation and management of the Splunk server and the Splunk Universal Forwarder, and to configure both to ensure they keep running as they should.

Knowing that most of our customers want to be able to direct change and enforce configurations using their tools of choice, we’ve partnered with Atlassian to develop a new HipChat integration for Puppet Enterprise. For those of you who use HipChat, you know how much value there is in being able to collaborate in real time with people throughout your organization. This new integration takes that one step further: now you can initiate changes with the new orchestration capabilities in 2016.1, see those changes as they occur, and discuss them, all directly from HipChat. 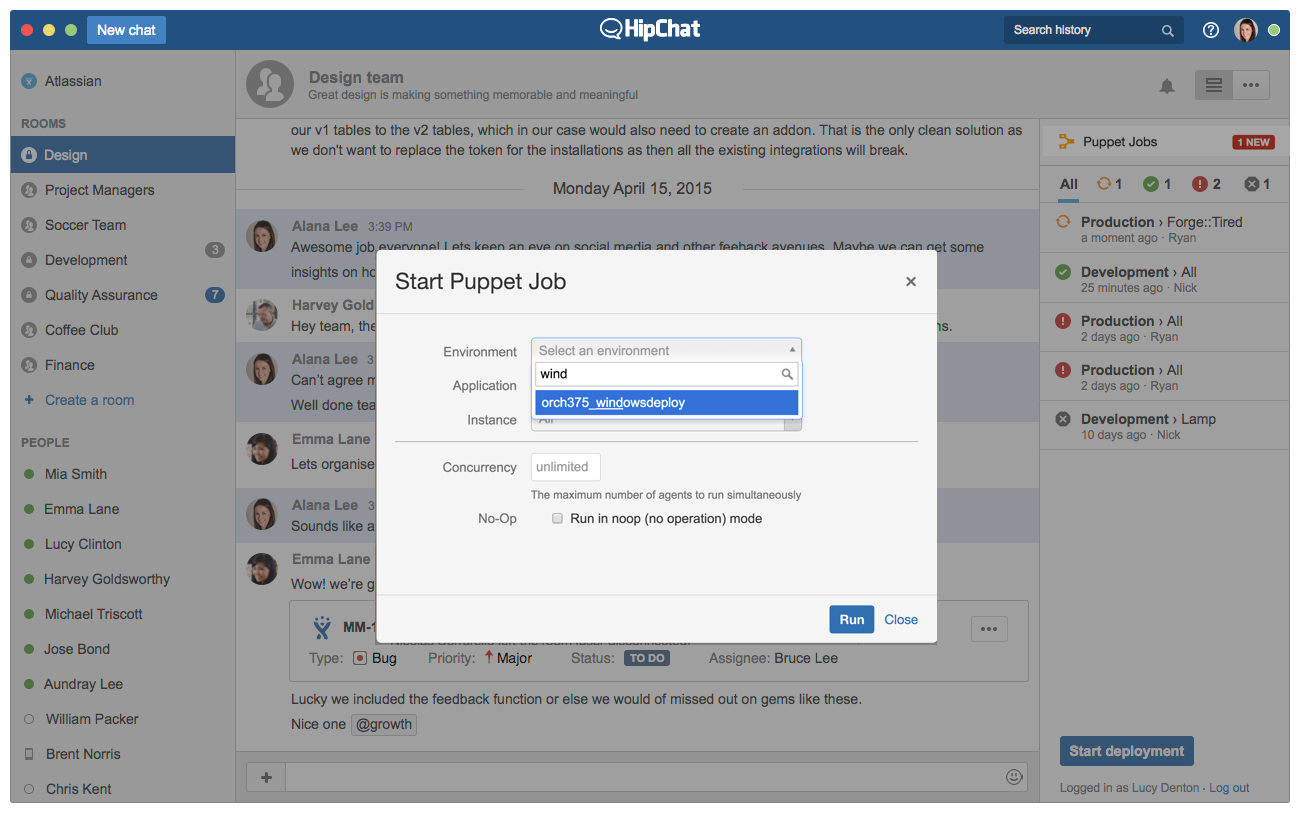 With this integration, we want to help you take advantage of the benefits of ChatOps: better collaboration, faster feedback loops, and greater transparency throughout your deployment processes. The preview of our HipChat integration will be available in a few weeks. To get notified when it’s available, sign up here

As more of our customers look to Puppet to help modernize their data centers, we want to give you the shortest path possible to delivering and operating constantly modern software. That’s why we’ve spearheaded a new project called Blueshift: so you can use Puppet to help you put new technologies into production as they arrive on the scene and you determine they're right for your company's goals.

Project Blueshift will initially focus on developing modules and integrations for containers, cluster managers, schedulers and next-generation operating-system technologies — for example, Docker, Kubernetes, Mesos, CoreOS and Consul. But Blueshift's scope will broaden over time to continually provide you with a bridge between where you are today and where you’re headed in the future.

Learn more and get started

We hope you’re as excited about this release as we are. As always, please let us know what you think and what you’d like to see in future versions.