We held our second Contributor Summit the day before PuppetConf on September 22nd. This Contributor Summit featured two simultaneous all day tracks, one for module contributors and one for core contributors. Luke Kanies, founder and CEO of Puppet Labs, kicked off the jam-packed day welcoming everyone and announcing that the Contributor Summit attendees would nominate the winner of our new MVP: Most Valued Puppeteer Award. The MVP is a community-voted award for someone who has gone above and beyond in their contributions to the Puppet Community.

Next, Puppet Labs’ product owners, Ryan Coleman and Eric Sorenson talked about the community metrics, core contributors and the state of modules. The vibrancy of the Puppet community and diversity of ways to contribute were the overarching themes of the morning.

After a morning of talks, everyone headed out to refill their bellies and coffee cups before heading to their chosen track.

Ryan kicked off the module track by introducing his team to the community that they interact with on a regular basis. He spoke about the recent formation of a team dedicated to Puppet modules at Puppet Labs and about how the Puppet Forge is doing, including the launch of Puppet Approved. He also covered some recent improvements to tools for module authors:

Meanwhile, in the Core Contributor track, Eric Sorenson and Deepak Giridharagopal, platform engineering director, discussed what's coming up for each core project. Puppet 4.0 is on the way, and it is built upon the revamped Puppet language parser that the community's been putting through the wringer since Puppet 3.2. The C++11 rewrite of Facter got a mention too. Simplified querying will be coming to PuppetDB, as it's been hugely popular with users of Erik Dalén's puppetdbquery module. The London-based development team are looking into much tighter integration between MCollective and Puppet, to simplify deployment and operation.

The big news was a preview of Tuesday's big announcement about the initial release of the new puppet-server project. The git repository actually went open-source on Monday so community members could get early access to the code while the developers were there in the room to help work through any kinks getting started.

Eric and Deepak’s talk spurred many questions and discussion with the audience. As it did among wider PuppetConf attendees, the conversation at the summit had both enthusiasm and concerns. Several community members voiced concerns that a (non-optional) component of Puppet in Clojure might increase the barrier to contributing to the project as well as making it harder to track down problems that previously only needed a map, a flashlight, and a working knowledge of Ruby. The agent-side rewrites in C, similarly, both expand the knowledge needed to get started and make it tough to send in even trivial patches.

Eric and Deepak acknowledged these were valid concerns, pointed out that extensions and modules would continue to support the existing ecosystem for quite a while, but that Puppet Labs will have to do a better job at consolidating and supporting our tooling to help people get started. Deepak encouraged a contributor who would like to see a trend toward more people contributing to core projects “to engage with other contributors and work through it.” He went on to recommend mentoring among community members and Henrik Lindberg, Puppet Labs consulting engineer, urged folks to join the weekly public triage meetings and to not hesitate to seek help before contributing, if they need it.

Next, community members signed up to give lightning talks. There was a long list in both tracks. Many folks said the lightning talks were one of the highlights of the morning. Some topics included: Puppet types, Puppet Explorer, VIM, types and parser coding, Puppet community modules in the same namespace, Puppet analytics, Beaker testing in the Windows environment, module sync tool, strict_variables, Puppet doc lint tool.

After breaking for an amazing lunch replete with a salad bar full of delicious toppings (the green goddess dressing was sublime), community members gathered to work at tables labeled with different technologies or topics for the second half of the day. In the module track, topics included Docker, Windows, Forge Improvements, module testing, Jenkins, while Hiera, MCollective, r10k, and Razor were a few of the topics in the core track. We had plenty of blank signs to allow folks to create custom tables on the topics that were important to them. For example, a group of community members from different cities in Brazil gathered to work together, which is something they never get to do at home!

Many attendees told me that they valued getting to work with the experts of the technology that they use every day. There were a wide variety of community members present including those just beginning to use Puppet, core contributors, module users, and module authors.

Austin Grice Puppet test pilot and Puppet community member at Seagate, said, “We came to Contributor Summit to meet other developers and learn. We talked with developers working on Beaker to help us with testing. I also work with Jenkins and Puppet and am excited to work with folks using Jenkins.”

One core contributor shared, “I like hearing about the up and coming pieces and it’s helpful to know the intention of Puppet Labs, so contributors can jump on board. I found the information about testing and quality of docs inspiring.” Two community members from Wake Forest University were excited to have a chance to work with people who are using Puppet in a similar environment.

The grand finale of the Contributor Summit came during Luke’s PuppetConf keynote on the day after with the announcement of the MVP winner, Erik Dalen and finalists, Daniele Sluijters, Tim Sharpe, and Felix Frank. Many thanks for all of your contributions over this past year.

We have a couple of upcoming contributor events this winter. If you weren’t able to make this September’s Contributor Summit, you’re in luck, we’re holding our third Contributor Summit in Ghent, February 4, 2015 (right after FOSDEM and ConfigManagementCamp, so you can spend a whole week talking about configuration management and Puppet in Belgium! We also have #puppethack, our online community hack day, coming up in December. As #puppethack will be completely online, no travel required. We look forward to “seeing” you there! 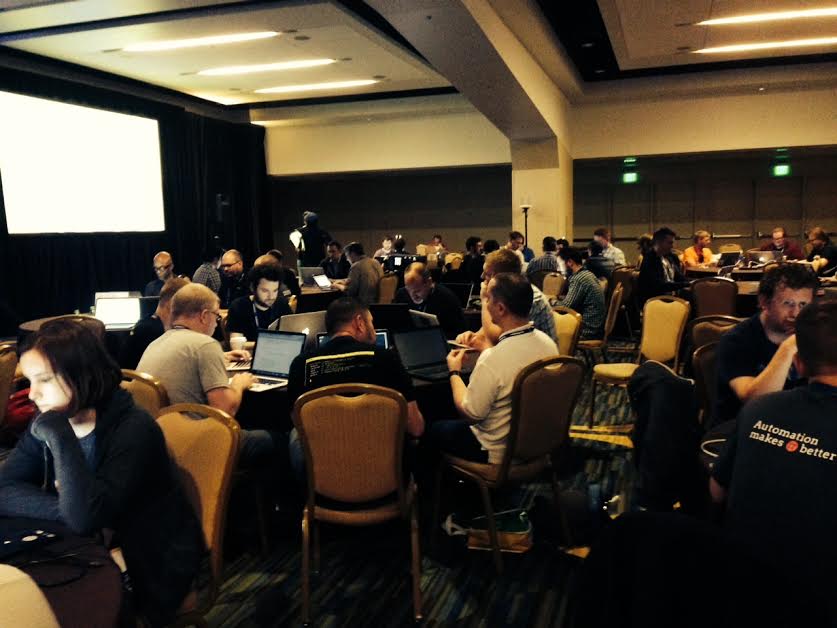