Today we’re excited to announce our newest release, which includes new ways of using Puppet in Docker, new integrations and modules, and enhancements to Puppet Enterprise, all generally available later this month. Our new release of Puppet Enterprise 2016.2 is designed to help you gain situational awareness and make rapid changes with confidence across more of your infrastructure.

Here are a few highlights of what's to come:

In April, we launched Project Blueshift, our dedicated engagement with leading-edge technologies and their communities. So far, we’ve focused on providing modules, examples, and guidance to help you deliver and operate modern software like CoreOS, Docker (Compose, Swarm, Network, UCP), Kubernetes, Mesos and Mesosphere, and more. Today we’re releasing a new set of Docker images to Docker Hub for running Puppet in Docker.

The Docker images now available on Docker Hub are for Puppet Server, PuppetDB and Puppet agent. These allow you to deploy and run Puppet within Docker for greater portability, plus easier maintenance, testing and scaling. In addition to the images on the Docker Hub, we’ve created examples and documentation to help shed light on ways to use Docker with Puppet. You can learn more about running Puppet in Docker in this blog post.

IT teams need to understand what has changed in their infrastructure in order to understand the impact new changes will have, and to deploy those changes with confidence. With this release, we’re adding a new level of granularity to show which changes were successful, which failed, and which failed but were able to revert to the last known good state. You can quickly discover any failed nodes that ran with a cached catalog, so you can troubleshoot and remediate issues faster, and ultimately reduce your mean time to recovery (MTTR).

Classify nodes based on structured and trusted facts

Good discovery tools are essential to your IT workflow. Access to granular metadata ensures you can efficiently identify, target, classify and manage servers, and make rapid changes. With this release, you can streamline your self-service provisioning workflow from the Puppet Enterprise web UI by using more expressive structured and trusted facts in your rules as you group and classify your nodes. The Puppet Enterprise node classifier web UI now provides richer metadata about your infrastructure, so you can organize with more certainty and granularity. You'll be able to drive change more quickly, more efficiently and with greater consistency. 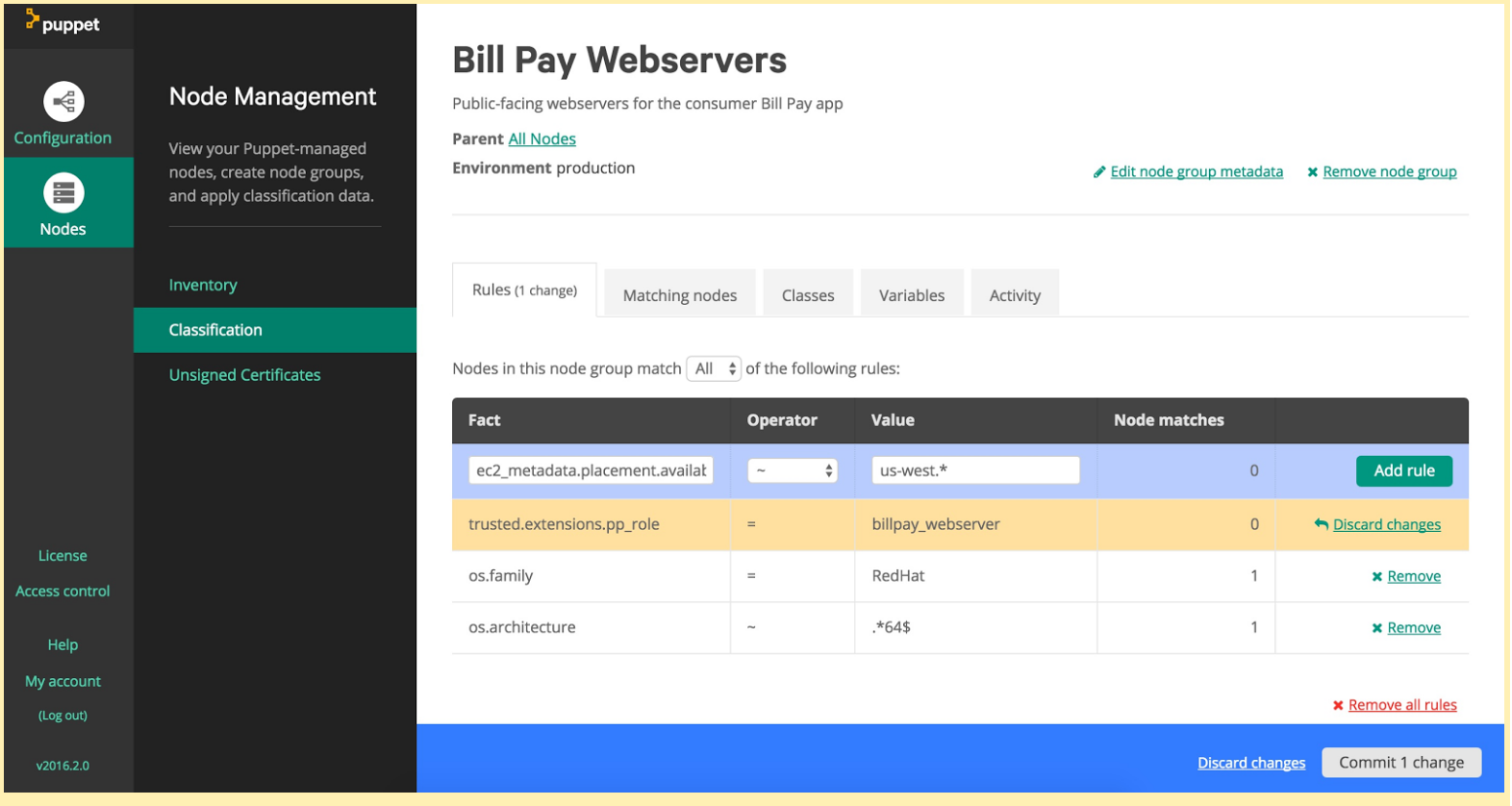 With large or complex deployments of IBM WebSphere, we know how important it is to make the installation process and configuration as quick and easy as possible. So in this release, we’re introducing a new module on the Puppet Forge to simplify management of WebSphere. The new module provides a repeatable and consistent process for deploying WebSphere instances, including deployment managers, application servers, and IBM HTTP Servers (IHS) for WebSphere Application Server.

Many of the largest companies in the world run their mission-critical applications on IBM z Systems and LinuxOne, so we’ve partnered with IBM to introduce support for managing these systems with Puppet Enterprise. If you’re using z Systems and LinuxOne, this gives you a common language to manage all your infrastructure, including any running on other operating systems. A fully supported agent with packages for SLES 11/12 and RHEL 6/7 will be available later this summer.

Our latest release of the Puppet Supported Cisco module includes support for the 5k, 6k, and 7k line of Cisco Nexus switches, in addition to existing support for the 3k and 9k series of switches. Our goal is to extend the benefits of automation to networking teams and help all of IT adopt a DevOps way of working. The Cisco module gives networking teams the power to automate time-consuming and error-prone manual processes, deploy networking gear faster and improve collaboration across teams.

Our last release (Puppet Enterprise 2016.1) added a whole new set of orchestration capabilities to help you drive changes across your infrastructure and applications on demand, including:

These capabilities are generally available now, and will be included in Puppet Enterprise 2016.2.

The IBM WebSphere module and Cisco module are available today on the Puppet Forge, and the new Docker images are available on Docker Hub. Puppet Enterprise 2016.2 will be available later this month. Watch this space!

We’re big believers in continuous learning and improvement at Puppet. That's why we want to get new capabilities and features out the door and into your hands as quickly as possible — to give you more opportunities to tell us what works well, what doesn’t, and help shape the future direction of Puppet Enterprise. We hope you’re as excited about this release as we are. As always, please let us know what you think and what you’d like to see in future versions.

Register for an upcoming webinar to see the new release in action: