Puppet Camp Melbourne: A story of a bank, two universities, Atlassian and more

While we've done quite a few Puppet Camps in Australia, it was the first one that I've personally attended. If I'd known what I was missing, I would have found a way to be there for some of the others. We had great talks, amazing conversations, and overall, it was just a great group of people to hang out with for a day!

This was also Puppet Labs CEO, Luke Kanies', first Australian Puppet Camp, so we were lucky to have him for the Puppet Keynote presentation, He spoke about how being a sysadmin is like being a troll under a bridge and how using Puppet for automation and configuration management can make your life so much better. The talk included an overview of the many components that come together to make Puppet and how the pieces fit together.

Quite a few financial institutions use Puppet, so it was great to have Keith Ferguson from the ANZ Banking Group as a speaker. He talked about their Puppet and DevOps Journey with details about some of their challenges, how they use Puppet to overcome them, and a lot of lessons that they learned along the way.

Puppet is also used frequently in educational institutions, and we had two presentations in Melbourne from universities who are using Puppet. The first of these was from Ronny Sabapathee and Nigel Williams talking about Facilitating Continuous Delivery: Implementation of Puppet at RMIT, including some details about how they got started with Puppet and how their implementation has evolved over time.

We're big fans of the Atlassian tools here at Puppet Labs, so I always enjoy hearing about how they are using our tools in their infrastructure. We had Peter Leschev from Atlassian talking about how their Build Engineering Team's Journey of Infrastructure as Code started 4 years ago when they began converting those manually maintained snowflakes into systems managed by Puppet, and how less human interaction with more automation has made them more confident about making changes.

I also got to spend some time with our Australian-based Technical Solutions Engineer, Patrick Kelso, who apparently knows almost everyone who works in IT in Australia! He gave a great Puppet demo to show off some of the basic functionality along with some new features. If you're in Australia and want us to do some custom demos for you, he's the person who can do them!

Our second university presentation of the day was from Eric Pizzani at The Australian National University. He talked about how he moved from managing 1 to 100 servers with Puppet with a lot of humor and examples of some things that weren't working well for them that were made much better using Puppet. As a bonus in the video, he walked us through the SELinux Coloring Book when several people in the audience were questioning whether it was a real thing!

We wrapped up the presentation portion of the day with Michael Richardson from Odecee on Node Collaboration with PuppetDB, including some common challenges that can be solved using PuppetDB and related tools that help extract information from PuppetDB.

Finally, a big thank you to the sponsors: Netsol, Odecee and ICE. These are the people who help us keep the Puppet Camps affordable for attendees.

If you missed this Puppet Camp, you can get links to the presentations and view materials from other past Puppet Camps by visiting the Previous Puppet Camps section of the Puppet Camp page.

If you are interested in attending a future Puppet Camp or speaking at a Puppet Camp, there are more upcoming camps in a variety of cities with more being scheduled soon. We’ll look forward to seeing you there! 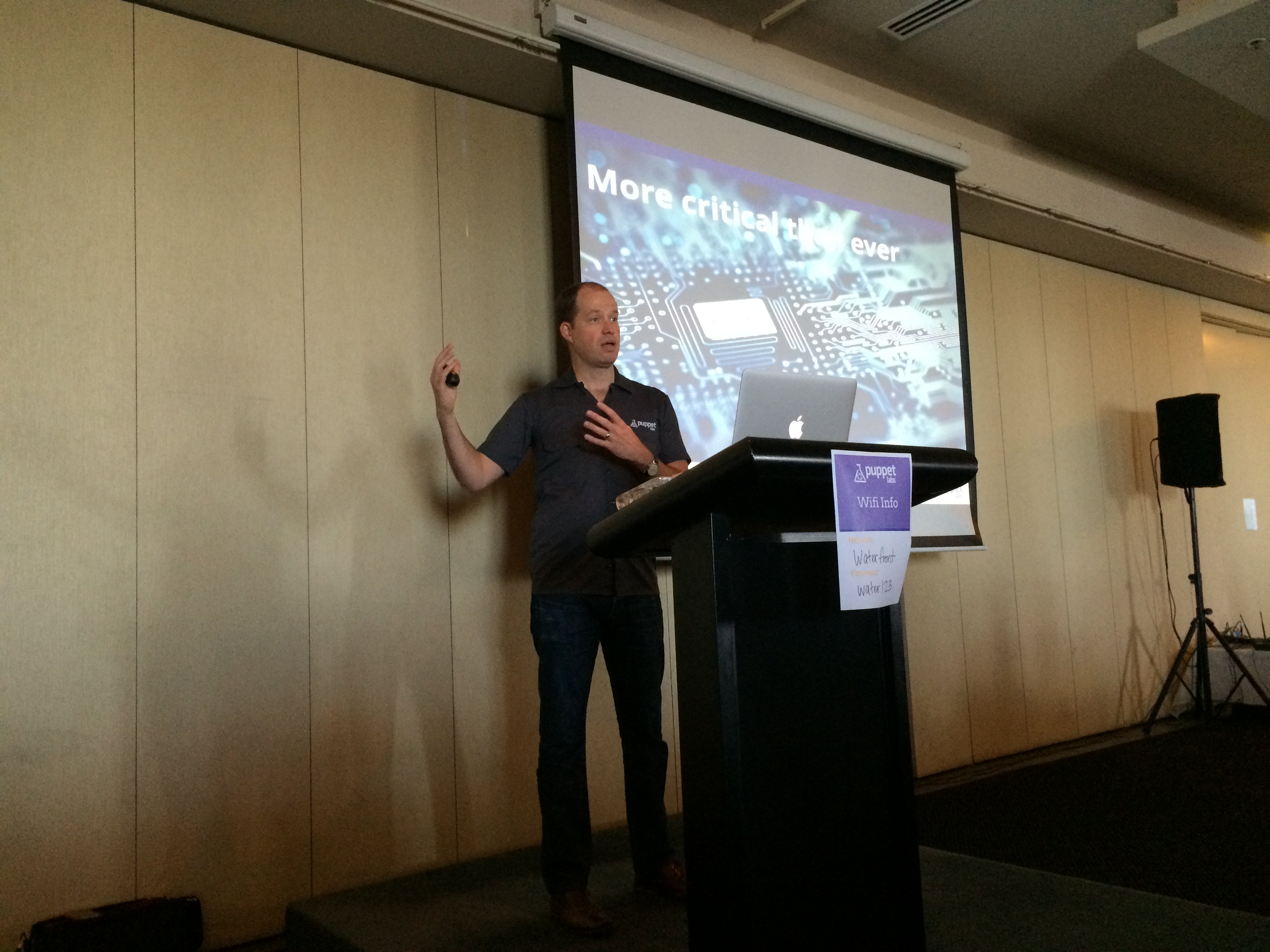