A new version of the Learning Puppet VM has hit the shelves! If you haven't already downloaded the Learning VM, get yours here.

A major goal of this release was to build the foundation we’ll need to get content updates out to users more frequently and easily. Now you can update quest content, tests, and tools in just seconds by entering a single command on the VM, instead of downloading the entire VM again. To get the newest Learning VM content, download the "LATEST" version of the Learning VM Guide. (EDIT: The new version of the Learning VM no longer uses a PDF Quest Guide. On downloading the VM, follow the instructions in the readme document to get started.)

This change lets us iterate on quest content, independent of the VM itself. Now we’ll be able to release new content more frequently, and respond more quickly to your feedback.

We have improved test coverage for the VM, and several issues that users pointed out to us have been fixed. Here are the major issues and fixes:

We now have a public issue tracker for the Learning VM. Please report issues in the tracker, and thanks in advance!

We’re going to continue developing and improving the Learning VM. Over time, you’ll see new quests, a rewrite of existing quests, and more frequent content updates. We’re happy to say the quest-based approach to learning has been hugely successful and popular, and we want to say a HUGE thank-you to everyone who has offered comments, suggestions, issues, and compliments.

Carthik Sharma is a technical instructor at Puppet Labs. 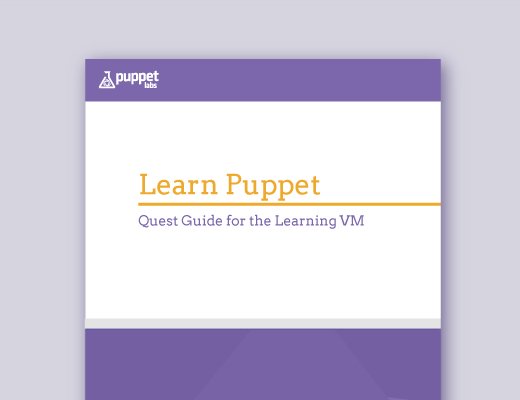