homebloggearing up for another decade of industry leadership

Gearing up for another decade of industry leadership

I started Puppet because, as a sysadmin myself, I saw an opportunity to help operations people do their jobs better and faster, and enjoy them more. I found it incredibly frustrating that everyone I talked to was inventing their own tools for automation and management — or even worse, often not using any tools at all. I figured, if I could build something nearly anyone could use, for nearly any problem, then maybe I could make automation a default behavior, rather than an exception. I knew automation would be helpful to anyone using computers, especially complex heterogeneous computing environments — I just needed to figure out how to get people to use it.

In the intervening time, we’ve blown right past what I would have considered success when I first started. People now know what automation is, and they can name multiple tools they might use. (When I started, no one had heard of any of them.) Puppet is the clear leader in the space, and people use it to manage tens of millions of devices, from servers and switches to cloud-hosted VMs and containers, from the operating system to the application. We are a company of more than 400 people, working with people and companies around the world. I’m incredibly happy to say we have a stable company that’s here for the long term.

But wow, is there still a lot to do.

Here we are 11 years later, in a software-driven world. It’s not just that so much of what we do is mediated by software — from banking to buying groceries to catching a bus. It’s that software is completely pervasive. It’s almost impossible to buy anything today that doesn’t have software in it (though not always good software). In this new world, automation isn’t just an enabler — it's a critical requirement.

Today, only a small fraction of software is delivered, updated, monitored and made secure in an automated way. I frequently meet with companies that have tens of thousands of manually managed servers. And what about all the outdated, insecure software in the devices around us? Too much human energy is being spent on pushing changes to software, responding to security events, and trying to understand the computing environment itself — valuable human energy that could be turned to the things human intelligence is great at, and that computers don't do very well.

Many houses now have more IP-enabled devices than data centers had when I started as a sysadmin. So configuration, security, and updating are critical problems for basically everyone, whether they realize it or not. Most of the enterprises that manufacture or service those devices, though, still can’t deliver on the promises they've made to us, because change is still expensive, and maintaining situational awareness within a modern enterprise is nearly impossible. Without that ability to understand the whole system and respond quickly to internal needs and external events, organizations can’t secure critical systems, so they miss out on gigantic opportunities.

On the other hand, those enterprises that can operate with excellence in this new world do things their competitors find almost magical. Look at Amazon’s ability to build out AWS, Netflix’s massive scale (estimated at 37 percent of North America’s internet traffic), and the high-frequency trading firms that make hundreds of millions of dollars by being microseconds faster than their competitors.

This is why we’re driving the worldwide movement to build always-modern software. It’s not enough to be better today, or to ship this one release faster — it’s about enabling you to always be at the leading edge, to continually push the envelope, tomorrow as well as today. This movement will define the next decade of software, characterized by pervasive adoption of clouds of all types; industry-wide adoption of DevOps practices and tools; and widespread recognition that organizations can’t remain competitive unless they make software a core competency.

In order to unlock more of your valuable human intelligence and creativity, and to help all of you navigate the tumult of the next decade, we’re making changes to our product and our company.

Whether they are talking about our open source software, our commercial products, our highly engaged community, or the company itself, everyone just calls us "Puppet." We’ve decided to stop fighting the current and go with the flow: We’re renaming our company from "Puppet Labs," which we’ve been named for the last few years, to "Puppet." This will simplify communication, and clarify that Puppet is more than software, more than a Git repository, more than a language.

In making this change, we took the opportunity to look at ourselves in a new light, and we saw a lot we can do to better prepare for the next 10 years. So much of how we work has evolved over the 11 years of our existence, and it was time to build a coherent logo, a new web site, maybe some new t-shirts, and more, to reflect accurately who we've become. So we have completely updated how we look, how we talk about ourselves, and how that plays out in the digital and physical world. You can find more about it all here.

Puppet is already a global company, with offices in five countries and customers around the world. But there’s much more work in front of us. To get from the current 15 percent of the world that has adopted automation to 50 percent, we have to meet customers where they are, and we have to build and manage complex, fantastic customer operations to do that.

That's why I’m happy to announce Sanjay Mirchandani is joining Puppet as our first-ever president and chief operating officer. He will partner with me in running the business, bringing his vast experience in operations and customer creation to Puppet. Sanjay will run customer operations — sales, marketing and customer success — along with managing support and our global expansion. He joins us from VMware, where he’s been managing operations in Asia. Sanjay was at EMC for 12 years in various roles; as CIO, he purchased Puppet for his IT organization. On top of that, Sanjay has years of senior leadership experience at the world's largest software company, Microsoft.

With Sanjay focused on customer operations and growing the business, I will be able to focus more on community, company culture, strategy, and product. I am convinced this is the best way for us, as a company, to fulfill the promises we have been making — and will continue to make — to all of you. 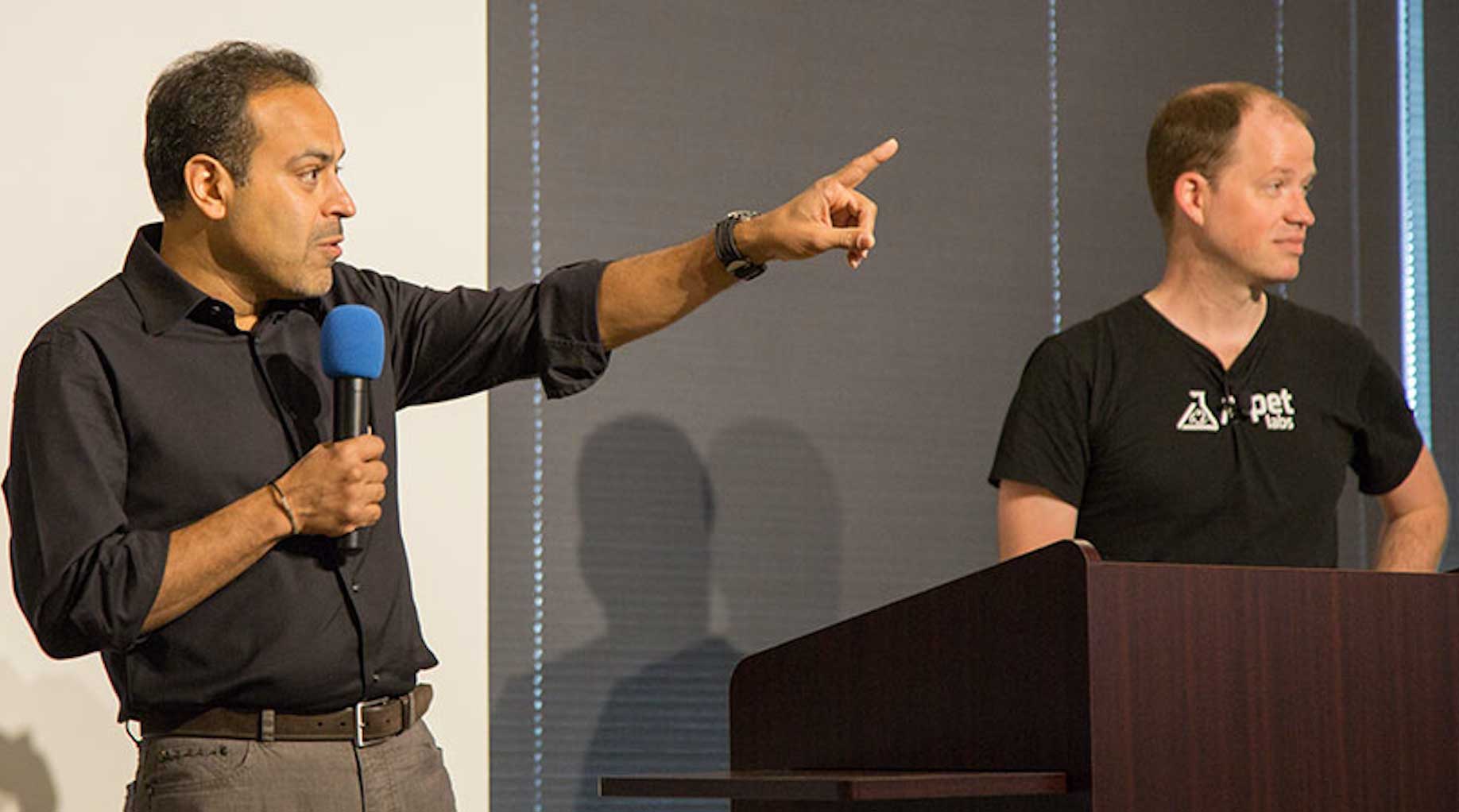 In addition to all these significant changes, we’ve got an awesome new product to discuss.

Late last year, we shipped the first version of our Puppet Orchestrator, built to deploy and update complex infrastructure and applications. The latest release of the Orchestrator gives every Puppet user the option to directly and precisely control how all that change rolls out, as well as perfect information about what's happened, where, and what the results were. So now you can move faster, with greater confidence.

This new release is unquestionably the best way to deploy, validate and manage configurations with Puppet for cross-node applications and global infrastructure. For the first time, you’re making change, ensuring compliance, and validating configurations on your schedule, as fast as the CPUs can spin, instead of waiting for convergence to happen. And all your changes happen intelligently, according the dependencies and relationships you’ve built into your applications and services.

If you’re using Puppet, you owe it to yourself to try the Orchestrator.

One of the most interesting, but also most challenging, parts of being at Puppet is helping our customers manage the production infrastructure they have today, while also providing a bridge to the future technology that will be in tomorrow’s production. We’ve got a great track record of helping customers deploy new tech into production, and making it work for them, but we’ve decided there’s more we can do to help customers navigate the choppy waters between the needs of today and the opportunities of tomorrow.

As a result, we’re launching the Blueshift project, which brings together Puppet staff, community, and partners to more quickly help our customers adopt any new technology as it arrives, without the normal costs of learning, iteration, and wandering around unmapped territory.

Over the past year leading up to this project, we’ve released modules to help you use Docker and Kubernetes with the same ease and security you have come to count on for the other technologies you deploy and manage with Puppet. Very recently, we and the Puppet community have added support for other new technologies, including Apache Mesos, Hashicorp Consul, Alpine Linux and CoreOS. Just as Puppet is the common language that bridges all functions and teams in the data center — compute, networking and storage — Puppet is the bridge from the technologies you rely on in production today to those you’ll build on tomorrow.

You can learn more about Blueshift and what it entails [here](/product/managed-technology/blueshift).

You, the Puppet community, are what got us through these last 11 years. I couldn't have developed Puppet without the engagement — both enthusiastic and critical — of its earliest users, and we could never have built this product, and this expanding company, without all of you: the people who use Puppet products, contribute code and ideas, and push us to do our very best. You care passionately about the technology and you work to improve it. You are a fantastically welcoming, vibrant and supportive community. You have helped grow the planet’s most widely used configuration management tool. You’ve made more impact than anyone else on adoption of automation in the industry. Now we're counting on you to help us push this movement through the next decade.

Luke Kanies is the founder and CEO of Puppet.