Today we are thrilled to unveil the talk lineup for PuppetConf 2016. We're getting seriously excited for San Diego, where you'll be able to chose from more than 80 talks delivered by expert Puppet users, customers, employees, and IT leaders from all over the world. Will you be joining us?

Here are just a few PuppetConf 2016 sessions to tempt you: 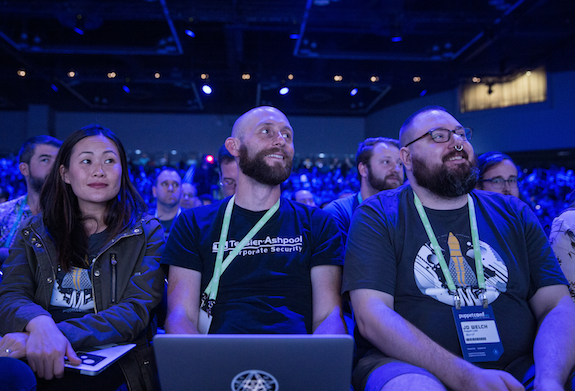 This year's PuppetConf will continue our tradition of in-depth sessions for beginner, intermediate, and expert Puppet users alike. There's so much to look forward to: check out the full schedule at https://puppet.com/puppetconf/agenda.

I want to take a moment to thank everyone who submitted talks for this year's PuppetConf. We were blown away by the quality of the submissions — and heartbroken we could accept only about 20 percent of them. We're hoping to still see many of the fantastic talks we couldn't fit in at other conferences and meetups around the world, including Puppet Camps and Puppet User Groups. And just because we couldn't fit it in this year doesn't mean we aren't interested — we hope some to see many of these talk ideas turn up in next year's PuppetConf call for proposals. You folks are seriously incredible.

In addition to a great speaker lineup, PuppetConf 2016 will include:

And with that, I'll stop posting spoilers and let you just read the full PuppetConf 2016 agenda for yourself. Pack your sunglasses and get ready to take some notes and learn a lot — see you in San Diego this October!

Kara Sowles is a senior community manager at Puppet.