The 2021 State of DevOps Report is here!

You may be as surprised as I am that the 2021 State of DevOps Report is live on the site before the annual tradition of a summer holiday (for those of us in EMEA anyway). We may or may not have done this intentionally in order to provide you with quality vacation reading. In all seriousness, it’s the tenth anniversary of the State of DevOps Report, and nearly 40,000 technical professionals from around the world have contributed to this body of research, the longest-running and most widely referenced DevOps research in the industry.

To observe the ten year anniversary of the report, Puppet invited a wider group of DevOps influencers to respond to the data. Contributors include the authors of the Team Topologies model, which has been immensely influential in the industry, as well as DevOps luminaries like Charity Majors, Patrick Debois, Stephen Thair, and many others. I’m immensely grateful that they took the time to interact with this year’s data and share their expertise with such a wide audience.

We also want to thank all 2,650+ people who took the time to complete our survey. For every individual who took the 2021 State of DevOps survey, we donated $5 to the National Coalition for the Homeless, the World Central Kitchen, and the UNICEF COVID-19 Solidarity Response Fund. We donated additional funds, provided by our generous sponsors, bringing our total contribution to $45,000. A huge thanks to our sponsors—Armory, BMC, Bridgecrew, Continuous Delivery Foundation, New Relic, ServiceNow, Snyk, Splunk, Team Topologies, and Women in DevOps.

Every year, we try to bring a new perspective to the DevOps conversation based on what we’re observing in the field, backed by data and statistical analysis. This year, we set out to explore why so many firms seemed to be stuck in the middle of their DevOps evolution, the role of team identities and interaction models, and whether the rise of automation and cloud relate to an organization’s success in its DevOps evolution. 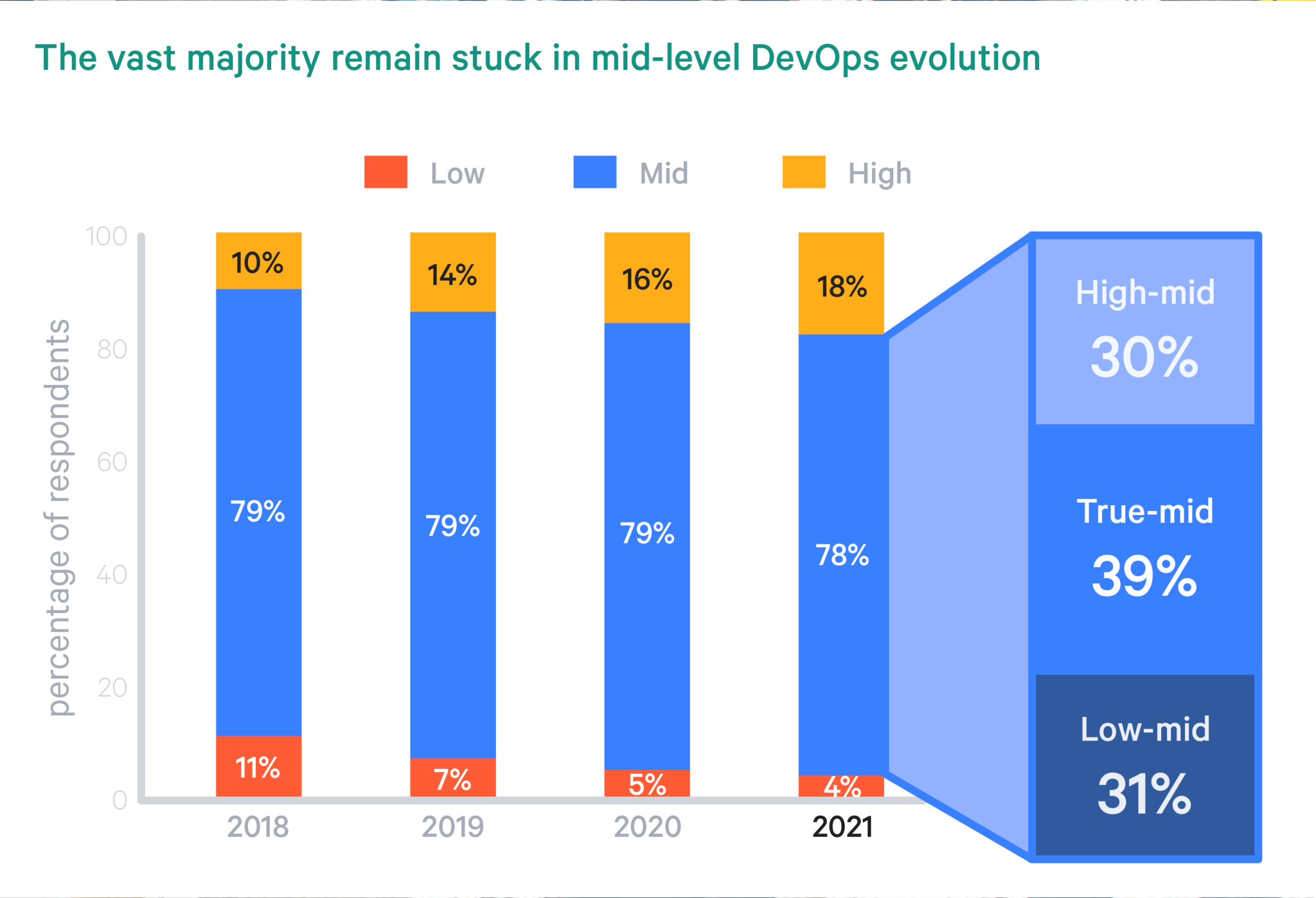 I’ll share a bit about what we’ve learned, but I highly recommend you download the report and give it a read for yourself!

Cultural blockers are keeping mid-evolution firms stuck in the middle

I admit I was not surprised to find that cultural blockers are largely at fault for keeping organizations stuck in the middle of their DevOps evolution. The most highly evolved firms benefit from top-down enablement of bottom-up transformation. That means culture. Fewer than two percent of high-evolution organizations report resistance to DevOps from the executive level, and 18% report they have no cultural blockers.

While challenges related to culture are most acute among low-evolution organizations, there are persistent blockers among mid-evolution firms. Among mid-evolution firms, a mix of cultural blockers present themselves. 21% report their culture discourages risk and 20% state responsibilities are unclear. 18% report fast flow optimization is not a priority, while 17% cite insufficient feedback loops.

So what happens when responsibilities are unclear? Enterprises are held back from evolving, thanks to cracks within organizational structure and dynamics. 91% of highly evolved teams report a clear understanding of their responsibilities to other teams compared to only 46% of low-evolution teams. While more than 3/4 of highly evolved teams state that teams adjacent to their own team have a clear understanding of their responsibilities as they relate to their own team, only 1/3 of low-evolution teams claim the same.

Highly evolved firms employ the Team Topologies model; they use a combination of stream-aligned teams and platform teams as the most effective way to manage team cognitive load at scale, and they have a small number of team types whose role and responsibilities are clearly understood by their adjacent teams. Having teams like this—and naming teams like this —creates a more well-defined path to achieving DevOps success at scale. It’s my personal opinion that ambiguous titles like a “DevOps team” provide a false sense of accuracy to many organizations who are not actually doing DevOps well.

Being good at automation does not make you good at DevOps; however, highly evolved firms are far more likely to have implemented extensive and pervasive automation. In fact, 90% of respondents with highly evolved DevOps practices report their team has automated most repetitive tasks. (Only 62% of organizations stuck in mid-evolution report high levels of automation.)

I don’t want to give too much away, as there is so much more to this year’s State of DevOps Report. We build on last year’s findings around the benefits of a platform team, discuss how DevOps success includes stronger security, and much more.

Our hope is these findings help you identify where in your DevOps evolution your company is, and we provide recommendations for achieving that future state of DevOps. We hope you enjoy reading the report as much as we enjoyed researching and writing it. Download it here.

Nigel Kersten is Field CTO at Puppet and co-author of the State of DevOps Report.