by Chris Matteson|8 December 2016
See more posts about: Industry News, Product and Tips & How To

NOTE: This article is targeted at versions of Puppet that use Hiera 3 or higher — generally Puppet 4, or Puppet Enterprise 2015.2 and later versions. Some of this information will also apply to older versions.

This blog post follows from my prior post, Hiera hierarchies and the custom facts everyone needs. In this new post, I hope to provide a basis for understanding how Hiera works under the hood, and the steps to troubleshoot when Hiera doesn't work as you might have anticipated.

In my last article, I recommended a hierarchy along these lines:

Let me explain what this actually means. Imagine this hypothetical collection of Hiera data:

Now imagine a node with these facts (obviously this is simplified):

The resulting set of yaml files that will be loaded by Hiera will be:

Anytime there is an entry in Puppet code like this:

The files will be evaluated looking for an entry like this:

The files will be evaluated top to bottom for a key value pair for mypasswd. If multiple files exist that contain the same key, as in the example below, the first entry discovered (the one nearest the top) will take precedence.

Puppet will continue to evaluate all the Hiera files in the hierarchy and build an array out of the values discovered. For instance this:

Would result in a final array of:

Hiera_hash works in a very similar way, but collecting hashes instead of an array.

Puppet 3 added an additional consideration with automatic lookups. Now any parameterized class like the one below will act as if there is a hiera() lookup for every parameter, specifically in the form of classname::variablename. For $servers this would be ntp::servers.

This greatly simplifies the ability to reuse Puppet code without needing to make explicit Hiera calls everywhere (which typically don’t exist in Forge modules). This value however will be overridden if the parameter is defined by an ENC of the Puppet Enterprise Node Classifier.

The next wrinkle is the addition of multiple backends in the hiera.yaml. The default backend for Hiera is yaml; however, numerous additional backends can be added, the most popular of which is eyaml. It looks like this:

When you use an additional backend, Heira's workload effectively doubles because it must walk the entire tree of the first before moving on to the second backend.

Note: Yaml can contain regular content alongside encrypted content, and the eyaml backend is capable of processing both. This could mean that Puppet is doing the extra work of two passes for no benefit (assuming you are using the same datadir and file extension). If that is the case, removing yaml as a backend in hiera.yaml is advised.

The next consideration is how Hiera actually gets evaluated. We’re used to Hiera being evaluated from within the Puppet Server during catalog compilation. However, Hiera can be accessed directly from the Hiera executable, or through the Puppet agent. Because we have the all-in-one Puppet agent, the Ruby installation is bundled directly with Puppet; this installation of Ruby could exist in parallel with a local install of Ruby. All three of these methods to call Hiera will have different locations for the Ruby gems they utilize.

If you’re troubleshooting a custom backend (like eyaml) that is installed as a Ruby gem, you’ll likely want it to be in at least locations 2 and 3 above. Generally it’s preferred to avoid system ruby entirely. Each location will have a different command to install:

Note: A note on the Puppet Server gem install. The JRuby Puppet instances that actually compile catalogs as a part of Puppet Server run as pe-puppet, not root. If only root has access to this gem location, these gems will not be loaded.

Let’s see how to figure out what's going on when Hiera doesn’t work as expected. In general, understanding how Hiera works from the previous section will let you follow the process through and find the issue. This section will provide several tools and highlight some common issues. If one of these common issues isn’t the problem, the general strategy is to follow the process via which Puppet makes calls to Hiera, as described in the prior section, and validate each step to find the culprit.

This section highlights the most common issues I encounter.

Here are a few tools and techniques to help identify which parts of Hiera are or are not working: 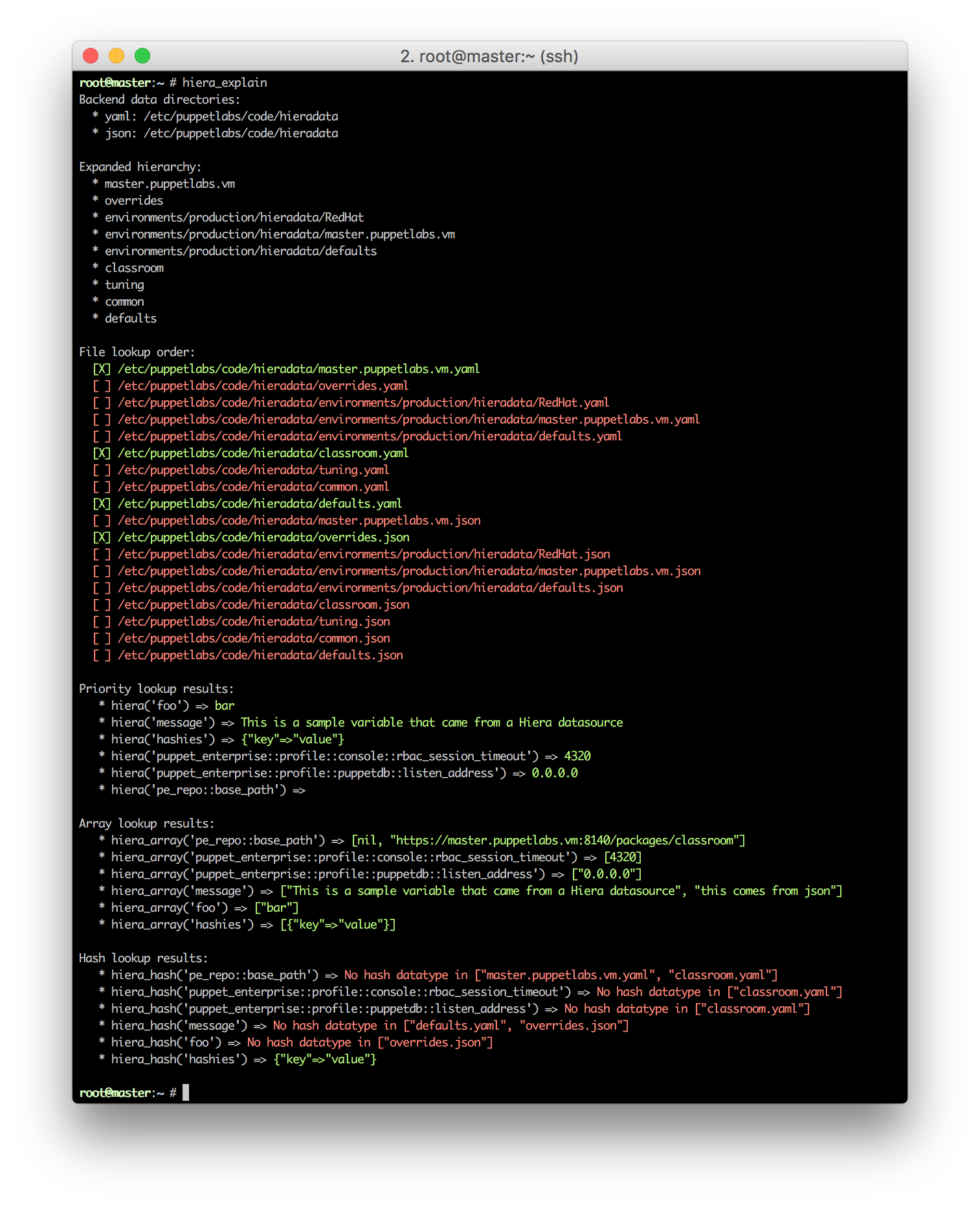 The goal of this post was to help peel back the layers of complexity surrounding how Hiera works with Puppet and Puppet Server. The tools and processes represented here have made the difference for me between confused frustration and harnessing the power of Hiera. I hope these tools and techniques will help you just as much.

If you have any questions or suggestions of your own, please share them in the comments section below.

Chris Matteson is a senior technical solutions engineer at Puppet.