Puppet Enterprise 2016.2 is here and available to you today. This release includes improved capabilities for reporting and node management, and we're also providing more integration with technologies our customers care about: Docker, IBM WebSphere, z Systems and LinuxOne, and Cisco Nexus.

A new set of images are now available on Docker Hub that make it possible to run Puppet in Docker. The images provide support for Puppet Server, PuppetDB and Puppet agent. These allow you to deploy and run Puppet within Docker for greater portability, in addition to easier maintenance, testing and scaling. In addition to the images on the Docker Hub, we’ve created examples and documentation to show you some ways to use Docker with Puppet. You can learn more about running Puppet in Docker in this blog post.

This release adds granularity to your Puppet reports to show which changes were successful, which failed, and which failed but were able to revert to the last known good state. You can quickly discover any failed nodes that ran with a cached catalog, so you can troubleshoot and remediate issues faster, and ultimately reduce your mean time to recovery (MTTR). In addition, we’ve added the ability to filter event reporting to show only events from your most recent Puppet run, so you can easily view the changes that were most recently applied.

With this release, you can use more expressive structured and trusted facts in your rules as you organize and classify your nodes. The user interface for the Puppet Enterprise node classifier now provides richer metadata about your infrastructure, so you can create more refined node groups and drive change more efficiently, with better consistency. 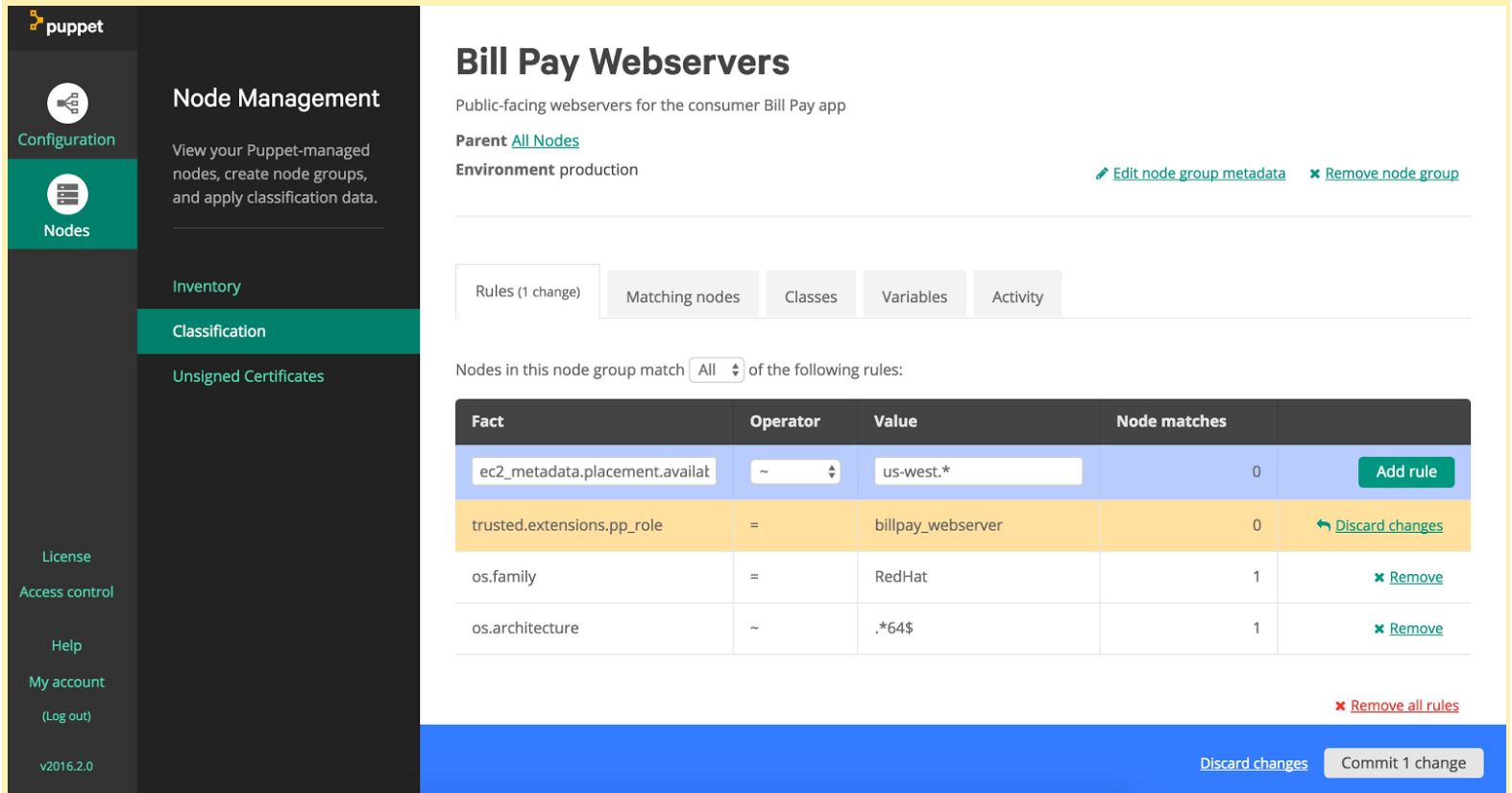 We’ve partnered with IBM to introduce support for managing IBM z Systems and LinuxOne with Puppet Enterprise. Keep an eye out for a fully supported agent with packages for SLES 11/12 and RHEL 6/7 later this summer.

Our latest release of the Puppet Supported Cisco module includes support for the 5k, 6k, and 7k line of Cisco Nexus switches, in addition to existing support for the 3k and 9k series of switches. The Cisco module gives networking teams the power to automate time-consuming and error-prone manual processes, deploy networking gear faster and improve collaboration across teams. It's another piece towards our goal of extending the benefits of automation to networking teams, to help all of IT adopt a DevOps way of working.

Our earlier release, (Puppet Enterprise 2016.1), added new orchestration capabilities to give you more control over how you direct changes within your infrastructure and applications, complete with:

If you are already using Puppet Enterprise and are interested in upgrading to the latest version, you can do it here.

If you are new to Puppet Enterprise, you can get started for free managing up to 10 nodes.