We often hear IT teams tell us how much pressure they feel, faced with the competing objectives of deploying applications and services faster while maintaining high availability of the technology they manage. That isn’t an easy balance to strike, especially when managing a large — and growing — infrastructure.

Provisioning new machines into an environment can be a common source of IT bottlenecks and downtime. Manually racking and stacking servers or deploying cloned images can often delay the availability of new systems by days or weeks. Plus, manual processes can introduce human error and magnify those problems when replicated within cloned images. Another source of delay can be reliance on a fragmented set of provisioning tools that work with only a limited part of your infrastructure, and don’t integrate well with configuration management automation tools.

At Puppet Labs, we don’t think it should be this way. That’s why our latest release of Puppet Enterprise includes new capabilities to automate provisioning across heterogeneous environments, from containers and clouds to bare metal.

Building on the introduction of Puppet Node Manager last year, Puppet Enterprise 3.8 now enables you to significantly reduce provisioning time across a heterogeneous infrastructure and get to Day 2 operations faster.

Here’s what you’ll find in the latest release:

A new Puppet Supported module for Docker lets you manage the Docker Platform and easily launch Docker containers within your Puppet-managed infrastructure. If you rely on containers to simplify application deployments, these new capabilities let you avoid configuration issues with the Docker daemon running those containers. Now you can spend less time troubleshooting configuration issues, and more time developing and deploying great apps.

Our new Amazon Web Services module lets you provision, configure and manage AWS resources in a consistent and repeatable way, with support for services such as EC2, Virtual Private Cloud, Elastic Load Balancing, Auto Scaling, Security Groups and Route53. With a shared language and a simple interface to common AWS resources, the AWS module lets you apply practices such as code review and continuous integration to the composition of machines and networks in AWS.

Puppet Code Manager is a new Puppet App that will help you manage the code that defines your infrastructure. The first capabilities we are releasing for this new Puppet App are based on the popular r10k technology, which improves reliability by giving you a consistent and automated way to change, review, test and promote the Puppet code you use to define your infrastructure, as it moves through all development and testing environments to production deployment. Combined with Jenkins and Puppet Labs' Beaker for acceptance testing, Puppet Code Manager enables you to apply continuous delivery practices to the Puppet code that defines your infrastructure.

When Can I Get It?

Both Puppet Enterprise 3.8 (including the next-generation Node Manager, Razor and Puppet Code Manager) and the Puppet Supported module for Docker will be generally available in late April. The AWS module is now available on the Puppet Forge. To stay up to date and hear more about what’s new, sign up here for the Puppet Enterprise 3.8 Upgrade Series, a set of educational webinars, videos, best practices and much more that we will share throughout the month of April. 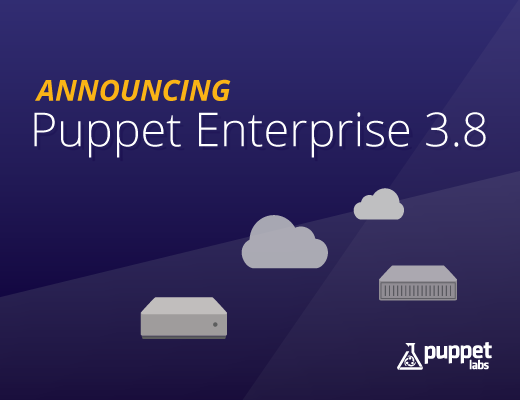