Accelerating your journey to pervasive automation with Puppet

Editor's note: As of 29 May 2019, we've sunsetted Puppet Discovery. Check out Puppet Remediate.

Indeed, most of these organizations share our vision of finding every manual process used to trigger change and replacing it with an automated one — what we call “pervasive automation.”

But three key challenges continue to stand between our customers and this vision:

The Puppet team will be rolling out three new releases of our product lines aimed at taking the next step in addressing each of these challenges.

At PuppetConf 2017 we unveiled a technical preview of Puppet Discovery, a tool that helps our customers find what they have and know where to start their automation journey. We received incredibly valuable feedback on this preview, and are proud to announce that as of May 8, Puppet Discovery will be generally available.

Puppet Discovery allows customers to get a complete picture of all of the resources running across their entire IT estate — both in the cloud (AWS, Azure, GCP tenants) as well as on premises (their VMware clusters, and any server reachable with an IP address). Puppet Discovery remotely connects to these regions without needing any agent installed on the targets, and with the proper credentials will discover the resources running on those systems — such as packages, services, users, and containers.

Puppet Discovery consolidates this data into a fully queryable store, exposed via REST APIs, command-line tools, and a web UI. Operators can execute tasks on these discovered resources, such as installing agents on nodes that aren’t yet managed by IT. Our customers now have a way to find out what they have, and know where to start on their automation journey. 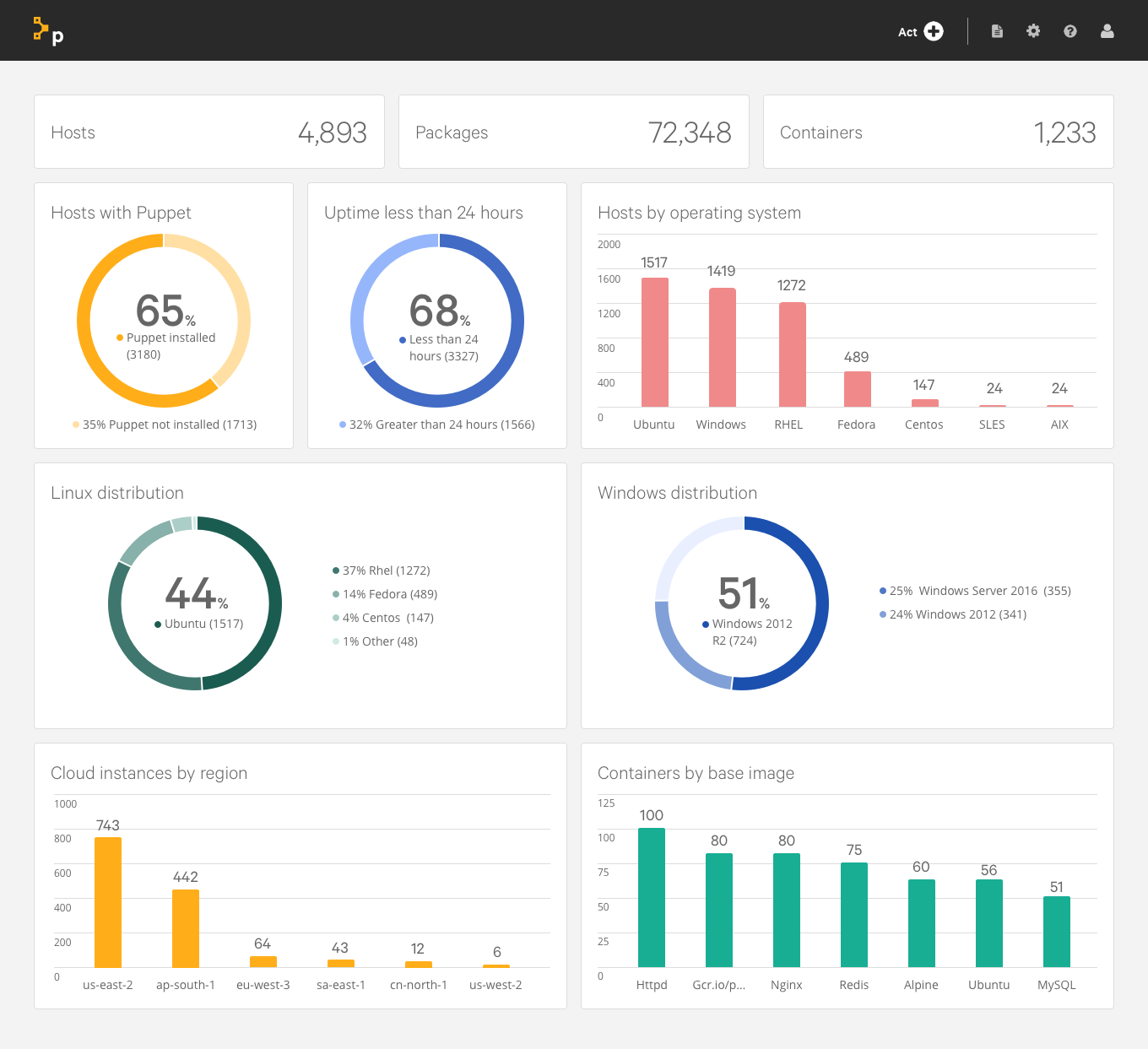 At PuppetConf 2017 we delivered Puppet Enterprise 2017.3, which introduced support for Puppet Tasks, augmenting Puppet’s desired-state configuration system with the ability to execute operational tasks on remote targets. Doing this helped broaden the set of resources that Puppet can operate on, as well as deepen the kinds of operations that can be automated on those resources.

Since PuppetConf, we’ve seen significant traction with Tasks, with many of our customers packaging them into Puppet modules: around 80 task-enabled Puppet modules are now available on the Puppet Forge, and 80% of those were contributed by community members. Puppet Enterprise 2017.3 allowed operators to execute these tasks across 100K node infrastructures, with the results packaged in the same kind of reports that Puppet makes available for desired-state configuration changes, enabling audit trails and compliance.

With Puppet Enterprise 2018.1, we are taking the next steps in making Puppet Tasks ubiquitous across our customer base. Puppet Enterprise 2018.1 has role-based access controls that allow an operator to give task execution permissions to specific users and roles on specific sets of nodes across their infrastructure, thereby making it possible for IT to delegate task execution permissions to each department based on the nodes they own.

This release also includes support for Puppet Task Plans, allowing users to orchestrate the execution of multiple tasks within a plan using control-flow constructs that are part of the Puppet language. Puppet Task Plans allow organizations to go even deeper with their automation, bringing with it all of the security, compliance, reporting, scale, and access control capabilities of PE.

There are great improvements to the manageability of Puppet deployments. The Puppet CLI can now backup the entire running state of a Puppet deployment, including code, config, certs, and all state in PuppetDB into a tarball, and restore that tarball into a running deployment. This is really useful for doing worry-free updates and upgrades of Puppet.

Last but certainly not least, Puppet Enterprise 2018.1 is a long-term supported (LTS) release, providing support through May 2020. 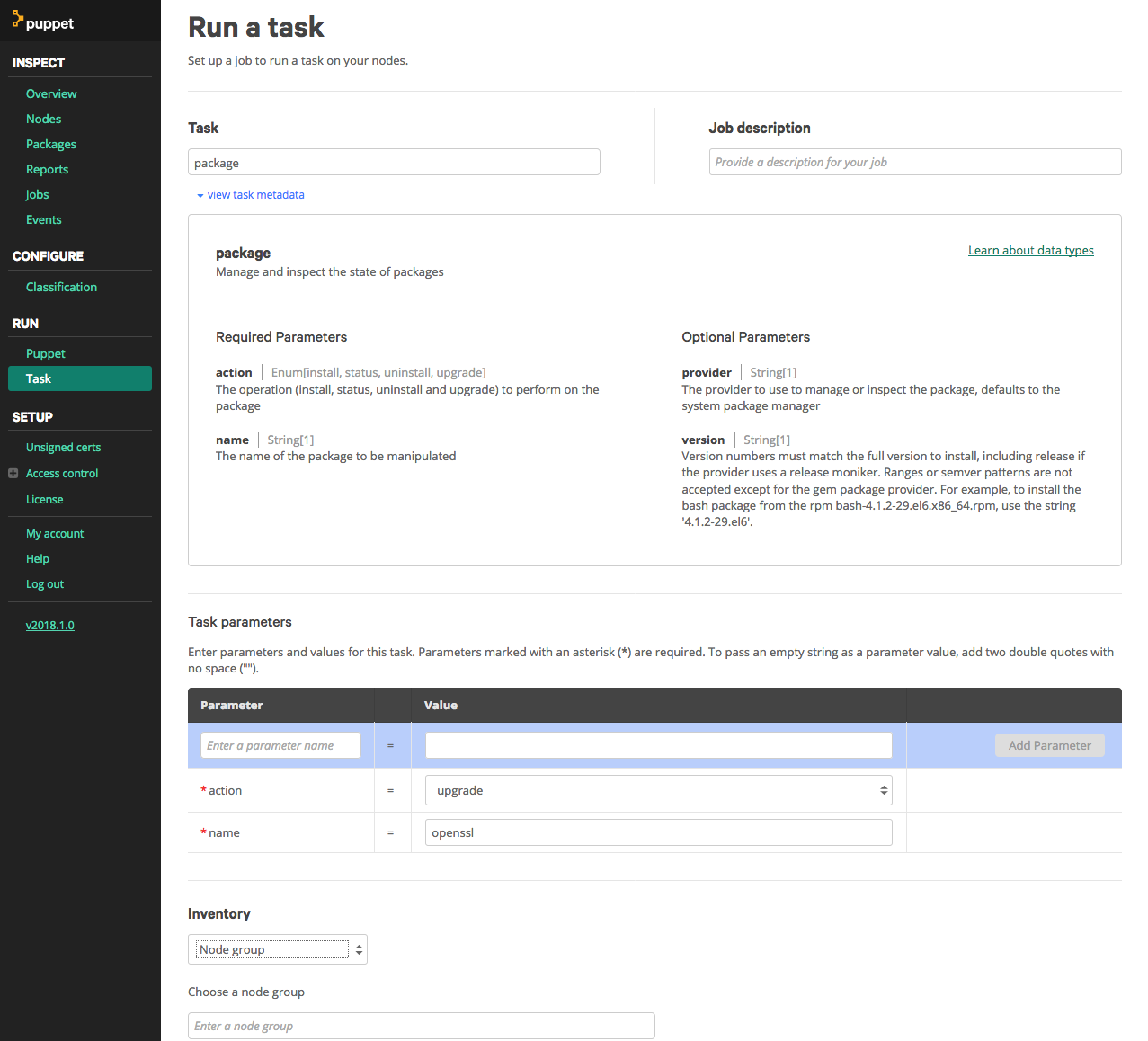 For a closer look at what’s new in Puppet Enterprise 2018.1, check out the announcement blog post.

Over the last six years we’ve produced the annual State of DevOps report, where we’ve tracked both the benefits of the DevOps approach as well as the growth across the industry in adopting DevOps practices. While we’ve made significant progress helping organizations break down the silos between Dev and Ops, we still see a significant difference in the workflow and tools available to operators to manage their infrastructure as code, relative to what developers have for managing the build/test/deploy cycle for application code.

This June, we’re delighted to introduce Continuous Delivery for Puppet Enterprise, which automates the build/test/deploy cycle for Puppet code, and is based on the same technology that powers Puppet Pipelines. Many of our customers already treat their infrastructure as code, and employ an automated workflow for promoting infrastructure code into production, but they have to set up this workflow on their own, essentially requiring each of our customers to reinvent the wheel.

Get the details on what Continuous Delivery for Puppet Enterprise can deliver in our announcement blog post.

Join us on the journey to pervasive automation

We’re incredibly excited to be shipping all three of these releases, and very much look forward to improving these products in the coming months based on your feedback! For more information on Puppet Discovery, Puppet Enterprise 2018.1, and Continuous Delivery for Puppet Enterprise, see the links below.

Omri Gazitt is the chief product officer at Puppet.