Great documentation is vitally important to the quality and usability of any software, and Puppet modules are certainly no exception. While this may sound like a no-brainer, the real challenge lies in maintaining docs that don’t lag behind the latest release of a project.

We created Puppet Strings to help module authors deal with this challenge by rendering user-friendly documentation from Puppet source code. We’ve just released a major revision of Puppet Strings with new features and fixes for many issues reported by early users.

Even if you don’t consider yourself a Puppet module developer, read on. Higher-quality documentation through Puppet Strings is valuable to everyone in the worldwide Puppet community. An easy way to contribute back to the modules you use everyday is to add Strings content to them. (Speaking of contributing, #puppethack, the online Puppet community hack day, is happening soon — on Tuesday 13 December — and that would be a great place to start.)

Strings is a YARD-based documentation tool for Puppet code and extensions that are written in Puppet and Ruby. Given some simple in-code comments containing YARD tags, Strings generates consistent HTML or JSON documentation for:

In this example, we’ll install the Strings Rubygem with bundler. (Note that the gem can also be installed system-wide using the puppet_gem or gem providers.)

To use Puppet Strings in your module, simply add the following to your module’s Gemfile, and then run bundle install:

Strings is compatible with Puppet 3.8 and above, and in this example we’ll be using the latest release, Puppet 4.8. Notes about differences with Puppet 3.8 will be specifically called out throughout this post.

It is straightforward to document classes and user-defined types using Puppet Strings.

As is the case with anything that can be documented with YARD, we’ll be working with a series of comments that make up the YARD docstring. This can include free-form text that is treated as a high-level overview for the class, as well as any number of YARD tags that hold semantic metadata for various aspects of the code. These tags allow us to add this data to the code without worrying about presentation.

The first few lines of this block of comments, which are not prefixed with any tags, constitute the description of the class.

Next, we have our first YARD tag. The @example tag can be used to add usage examples to any Puppet or Ruby code.

The string following the tag is an optional title, which is displayed prominently with the example in the final output.

Finally, we have @param tags for each of the parameters of the class.

The first word after the tag is the name of the parameter, and the following string describes its purpose. Since Puppet 4.x is a typed language, Strings automatically uses the parameter type information from the code to document the parameter types. If no type is specified in code, the parameter defaults to the type Any.

Since Puppet 3.x does not support typed parameters, the @param tags should include the expected type of the parameter, like so:

Defined types are documented in exactly the same way as classes:

Now that we’ve got some documented code, we can run Strings to generate the documentation in either HTML or JSON. I’ve separated this code into two files in my module: class.pp and defined_type.pp:

To generate HTML documentation, we’ll invoke the following command from the top level of the module:

This results in the creation of a docs directory and an index.html file, which we can view in a browser. Using the sidebar on the opened page to view the generated documentation for the class, we see: 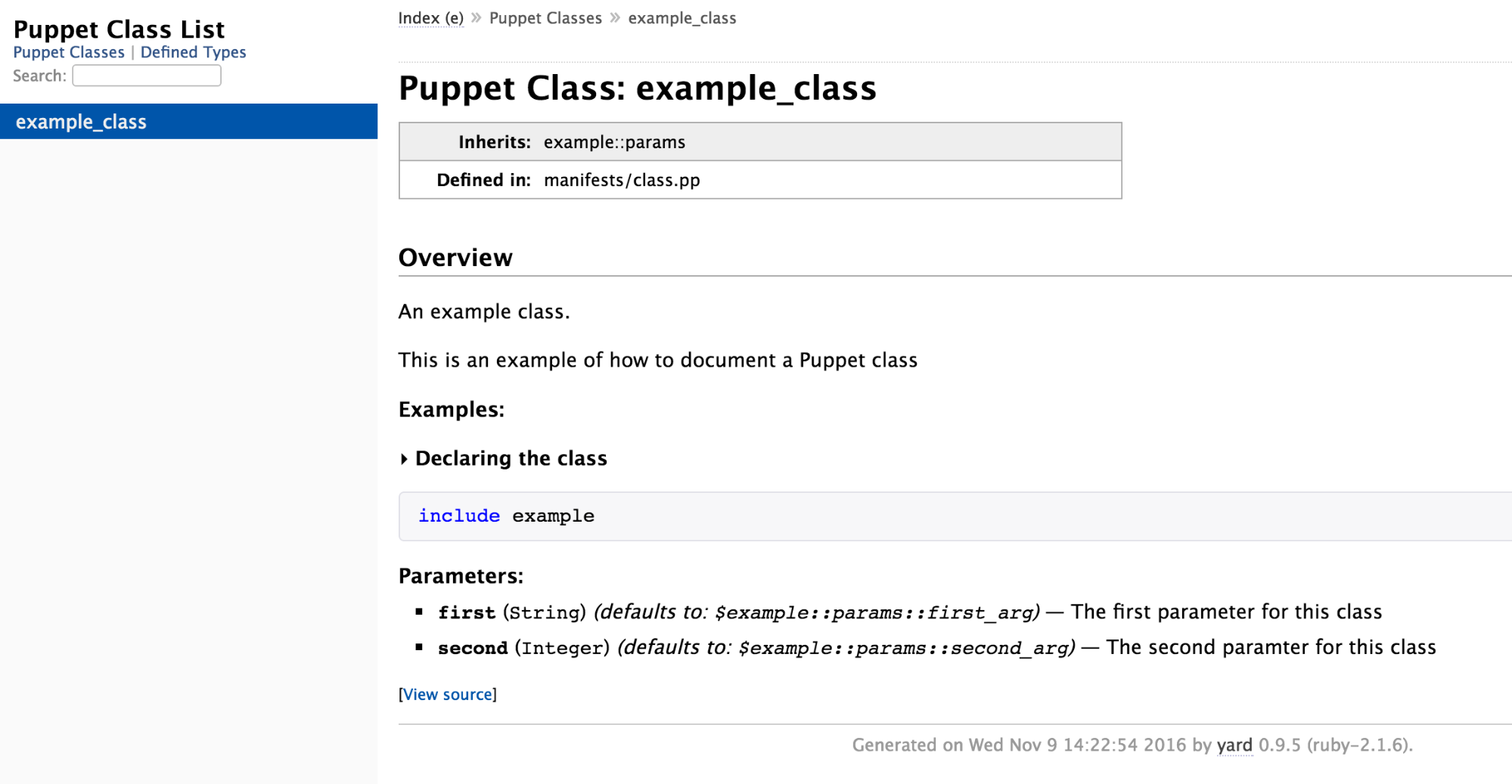 Strings automatically groups documented code by category, allowing category to be browsed separately. Here we see that we have Puppet classes and defined types available to view.

Alternatively, you can generate the same documentation as JSON. This can be useful for handling or displaying the data with your own custom applications. To generate JSON, run the following command:

This results in a file, output.json, populated with all of the parsed data organized similarly to the HTML navigation categories above:

In addition, notice the @return tag, which should always be included to document what a function returns.

The first comment before the call to create_function, “Subtracts two things”, acts as the top-level docstring for the entire function. This provides a general description for the function as a whole.

Next, we have the two dispatches, which are signature overloads. These can be documented separately by adding a docstring with tags above each. Strings displays each as a separate signature, both in the HTML and JSON output.

Each overload can include text to describe its purpose, as shown in the example above with subtracts two integers and subtracts two arrays.

The YARD docstring must be written inside of a heredoc within the :doc parameter of the Puppet::Parser::Functions::newfunction call. While clunkier in this respect, the documentation markup syntax is otherwise the same. Because 3.x functions do not have dispatches or allow multiple overloads, there will be only one set of parameters and one return type.

Assuming we’ve placed these functions in lib/puppet/functions/4x_function.rb and lib/puppet/parser/functions/3x_function.rb respectively, we can generate documentation for them by running the following command:

This will run Strings against all files ending with the .rb extension anywhere under ./lib/puppet on the filesystem.

The last two Puppet constructs we’ll document are types and providers. These are fairly easy to document, as Strings automatically detects most of the important bits. We’ll start with a simple resource type:

Perhaps the most interesting bits here are the first comments before the call to newtype:

If your resource type includes parameters or properties which are dynamically created at runtime, you must document them with the @!puppet.type.param and @!puppet.type.property directives (see the end of this post to learn more). This is necessary because Strings does not evaluate Ruby code, so it cannot detect dynamic attributes.

Apart from dynamic attributes, the only other necessary code for complete documentation are descriptions for each parameter, property, and the resource type itself. These must be passed to the desc method. Each description can include other tags as well, including examples.

Every other method call present in the type is automatically included and documented by Strings, and each parameter or property is updated accordingly in the final documentation. This includes calls to defaultto, newvalue, aliasvalue and so on.

Providers are processed in a similar way:

All provider method calls, including confine, defaultfor, and commands, are automatically parsed and documented by Strings. The desc method is used to generate the docstring, and can include tags such as @example if written as a heredoc.

Generating documentation for an entire module

We now have a module full of manifests, functions, types, and providers. By running the following command, we can instruct Strings to generate documentation for every file ending with the extension .pp or .rb:

This results in a browsable \_index.html file in the docs directory which can be navigated to view each of the files that we’ve just documented. Hurray!

Of course, the --emit-json <FILE> or --emit-json-stdout options could also be used to produce JSON rather than HTML. In either case, with these simple steps and minimal code changes, we’ve fully documented our module!

Since the documentation is embedded with the code itself, it’s much easier to remember to update it in step with the code as the code changes. No more out-of-date documentation! In addition, by using Strings, we’ve also gained a free way to generate aesthetically pleasing HTML documentation. Strings can even run a web server to serve your Puppet docs for you!

For more in-depth information about Puppet Strings, check out the readme. The YARD getting started guide and tag overview guides are also recommended reading for advanced users. In addition, we’re working on a few more blog posts and a comprehensive style guide for the project, so stay tuned!

William Hopper is a software engineer at Puppet.

See more posts in Industry News, Product and Tips & How To
RSS Feed
Puppet sites use proprietary and third-party cookies. By using our sites, you agree to our cookie policy.